The lips have been considered aesthetically pleasing when they maintain a certain proportion of volume with respect to the patient’s face as a whole. Overly enlarged lips are avoided, since they give the sensation of “being operated on”.

Traditionally lips have been “filled” in one way or another to achieve the right proportions. However, we have essentially treated the lips to increase their volume.

Aesthetically, it is accepted that patients should show a little of the upper teeth at rest. Indeed, one of the first signs of aging is the drooping of the upper lip, so when the patient speaks he only shows his lower teeth. In these cases, if we use a filler to increase the volume, we would be increasing the weight of the lip, consequently, over time it will end up falling even more, causing the patient to not achieve the desired result.

How is a Lip Lift performed?

It is a novel and simple procedure that achieves attractive and sensual lips through a small incision hidden under the bottom of the nose that lifts the upper lip and shortens the space between the base of the nose and the upper lip. (Philtrum). Next, the skin of the upper lip is removed in the area where it meets the nose. The amount of tissue that must be removed will depend on the particular case, and it is sutured without being noticed when the healing process is complete. As a result, you will have younger lips, with greater volume and a greater transition zone between the lip skin and the labial mucosa (Vermilion).

Postoperative care is minimal, patients should not smoke for at least two weeks before and four weeks after to improve tissue healing. The wound is treated with antiseptic once a day, and anti-inflammatories are needed only for a couple of days. The sutures are removed in 10 days, and during this phase it is recommended to try not to gesticulate too much so as not to load the edges of the wound with tension, and thus not alter the shape and size of the scar. If bruises or bruises appear, these usually disappear in around two weeks. With the withdrawal of points it is normal for there to be a small drop in part of the elevation that we have achieved. It is not advisable to tighten too much, and it is preferable to remove more skin than indicated, that if necessary, the procedure can be repeated in a second time.

After a month, a natural result is established due to the decrease in edema and inflation. The repair period of the scar area usually lasts one year. In most cases, the scar ends up becoming invisible. During the first few months it is advisable to protect the scar from the sun so that it can heal properly and does not take on a permanent reddish hue.

The satisfaction of the patients who undergo the Lip Lift is much higher than that of the fillers, and also the longer-lasting results over time. In men there is a characteristic, since if they have or want a mustache, the shape of the incision should be modified so that it does not stay too close to the nose. 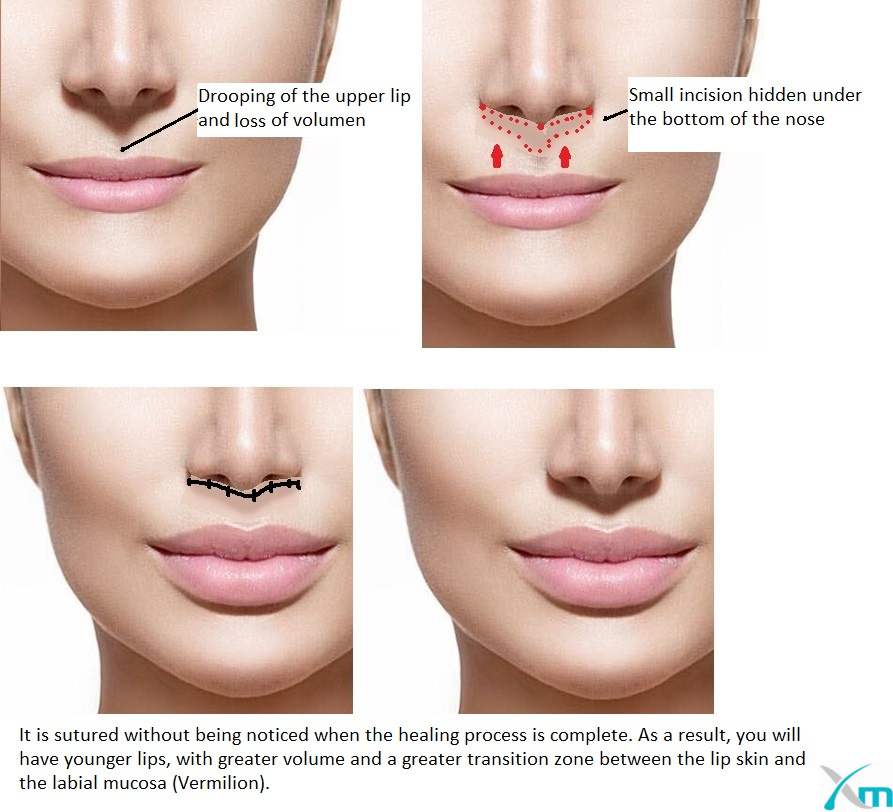 Touch the button below and request your first first valuation appointment COMPLETELY FREE for a limited time.